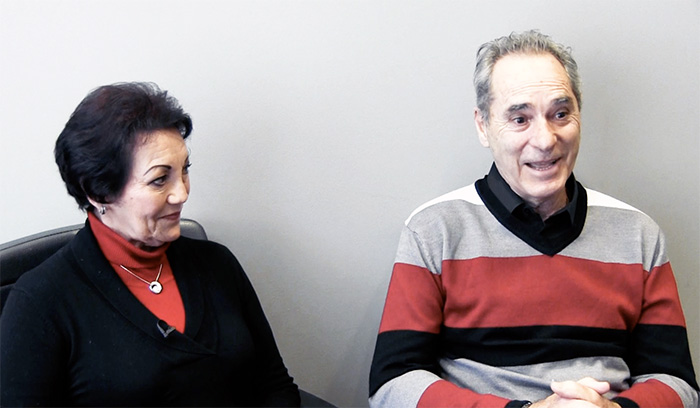 Although they both grew up in Jewish neighbourhoods, Chips and Paul met for the first time at Margate, a decidedly non-Jewish seaside resort on South Africa’s southern coast. Chips’ grandmother, who was with Chips at the time, scouted the area for Jewish men, which is when she spotted Paul. Convinced the two were bashert, she indulged in a little matchmaking, with the result that Paul phoned Chips when he returned home. While they did break up at one point, Chips’ grandmother’s judgment was vindicated when the two married at Cyrildene Shul in Johannesburg a few years later.

When their children were three and five years old, the couple made the decision to immigrate to Canada. Paul, an engineer by training, was transferred to Guelph. There, the family joined the local synagogue and enrolled their children in public education. It was while living in Guelph that Chips and Paul became involved in work combating antisemitism. Growing up in Jewish communities, neither had encountered much antisemitism, but living in a small town they were forced to come to terms with being different.

Once their children were grown up, Chips and Paul moved to Toronto, purchasing a house in Thornhill in order to be close to the South African community. Both Chips and Paul are involved in Jewish education through their local synagogue and remain active in a variety of sports. In addition to their faith, sport is one of the ways they stay in touch with their grandchildren, which is why Chips says, “As long as we’re able, we’re going to keep doing it.”